We Oppose Anti-Union Policies & the Criminalisation of Labour Activists 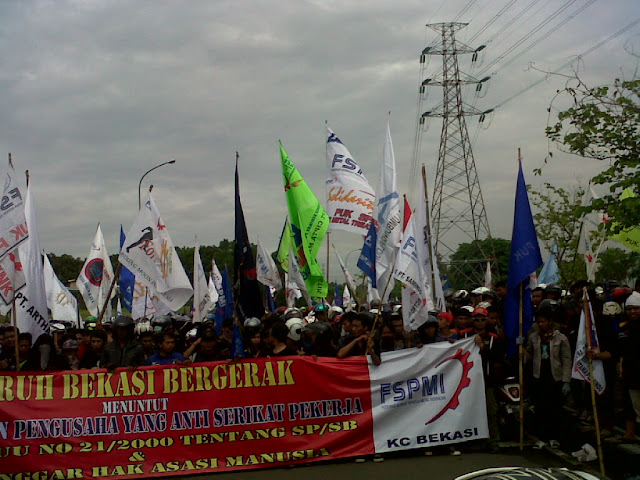 The workers of PT Samsung Electronics Indonesia (SEIN) Bekasi established a union and joined with SPEE-FSPMI on 21 October 2012. They received a letter of acknowledgement from the Bekasi District Labour Department (Disnaker) on 30 October 2012 registering 13 leaders and 195 members of the plant level union.

Beginning on 27 October the management started to systematically intimidate the members of the union with the use of hired thugs (MBB).

The leaders and members were pressured to leave SPEE-FSPMI. Proof of this intimidation was evident on 22 November 2012 when all of the members of SPEE-FSPMI were dismissed unilaterally and under pressure from the company, the leaders resigned from FSPMI. Union members were also threatened and intimidated at Samsung’s vendor factories, including Kepsonic, Sunjoo, Samindo, Da Yung Indonesia, Sun Shine, Dae hwa, Starkink, Samoin, TSTM, JAE Hyun. Over 3000 workers are employed at these factories.

This anti-union policy of Samsung and its vendors in Indonesia is a clear violation of the Constitution and the criminal law.

On 1 September 2012 the workers at PT Toyota Astra Motor (TAM) Karawang, West Java, formed a trade union. These workers were employed under outsourcing contracts with two different companies, namely PT Kaltim Nusa Outsourcing Ethics (KNE) and PT Dinar Ivory Makmur (DGM) despite having worked for over five years at PT TAM. They formed the union in order to challenge their status as outsourced workers which was in breach of Law 13 of 2003 Articles 59 to 66, with the aim of becoming permanent workers.

On 24 September they received a letter of acknowledgement from the Karawang District Labour Department registering the plant level union with 15 leaders and 165 members. On 2 October 2012 the contracts of all these workers were terminated and PT TAM used the army to escort the workers from the factory. On 3 October 2012 the workers set up a campaign tent outside the factory which they continue to occupy. PT TAM’s union busting actions are in violation of Article 28 of Law 21 of 2000.

Mr. Edi Iriwadi achieved a wage rise of 150% for the workers of PT Indocement in 2012. In retribution for this, the company has criminalised him using the ambiguous or ‘rubber’ law which is "unpleasant acts". Edi Iriwadi has been imprisoned since 27 November 2012 at the Class I State Prison in Bandung, West Java.

On 20 November 2012, after a demonstration to demand higher minimum wages in East Java, two MPBI labour activists, Mr. Pujianto and Mr. Doni were detained by police on charges of "provocation and destruction". However, they were finally released on 29 November 2012 as a result of pressure from the massive MPBI supporter base in East Java which rejected the criminalization of these labour activists. The criminalisation of labour activists who are fighting for their normative rights such as wages and the elimination outsourcing is anti-democratic.

1. Stop the union busting actions of PT Samsung Electronics Indonesia in Bekasi and its vendors and also of PT Toyota Astra Motor in Karawang. In the name of justice and human rights, MPBI demands that the companies reinstate the workers who were sacked because they formed a union.

2. The government must act decisively and revoke the business licenses of anti-union companies who have violated Law 21 of 2000, the Constitution and Human Rights.

4. MPBI will continue to fight and will campaign for a boycott of the products of multinational companies that are anti-union and anti-democratic.
at 5:23 PM